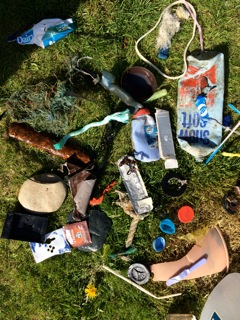 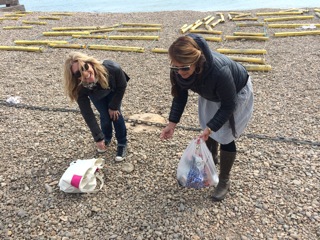 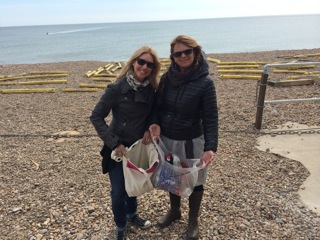 Spending an afternoon in Brighton with my sweet friend, Sarah, collecting plastic.

My Art will be shown at a conference: PLASTIC IN THE MEDITERRANEAN SEA

I am one of three artists who’s work will be shown at the conference for Plastic in The Mediterranean. This event is organized by the Prince Albert ll of Monaco Foundation, Surfrider Foundation Europe, Tara Expeditions and the Mava Foundation. The conference will be focused on exploring solutions that can reduce or end the plastic waste that is in the Mediterranean and impacting marine life.

The conference will be held in Monaco on March 10 and March 11.  The show will be on display for two months, starting March 10th. at the Gallerie des Pecheurs, Monaco

Janis Yerington invited me to join her in teaching a Saturday Morning art workshop at Bolinas Museum on November 15th. It was open to all ages and all ages joined in! This program was planned to compliment Ocean Wonders & Wellness; an art show on the ocean and ocean health.

We did a small presentation about ocean health and the impact of plastics or not disposing of waste properly. We spent most of our time in play. We both had a fantastic time sharing our love of art and our coast by assisting the participants in using repurposed plastic to create their own works.

A special thank you to Janis for including me in such a great event. If you are on the coast the last two weekends of November you can see Janis’ show at the Bolinas Gallery. She’s the master artisan behind Bolinas Folk Art.

Don’t miss the show at the Bolinas Museum on view until January 4, 2015. 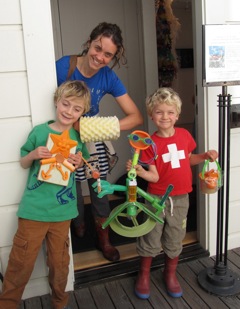 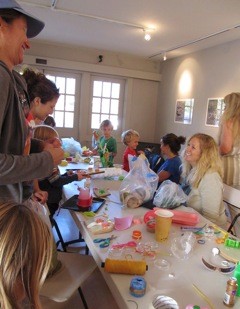 My artwork used in concert promotion

I met Yannick Jacquet on a pilgrimage along the path to St. James. He was one of a group that I ‘traveled’ with for several days. Here is a video of him on that trip performing. After I returned home I did a portrait. Now we have come full circle. He’s using the portrait I created for a poster promoting a concert he is giving.

Yannick Jacquet’s concert is this weekend in Porto, Portugal and if you happen to be in Porto, you’ll be in for a musical treat.

My Night Out with Captain Charles Moore

Captain Charles Moore invited me to share his table at the Peter Benchley Ocean Awards where he was honored as the Hero of the Sea for 2014. It was fantastic to see him recognized by his peers for his tireless work and campaigning on behalf of ocean health. Captain Moore is credited with discovering “The Great Pacific Garbage Patch” in 1997 and since that time has dedicated himself to educating the public and establishing protocols to monitor marine and beach micro-plastics, thereby helping to give scientists the world over a way to record and share the data they gather. Apart from the sheer delight to share a table with the Captain I had the pleasure of meeting a fellow Ocean Plastics artist, Angela Hazleton Pozzi, of Washed ashore.org.

The entire night I felt like I was in a dream. The event took place at the Academy of Sciences in San Francisco amongst the pools of fish and the old white alligator grotto. A delicious vegetarian menu insured that there was no eating of friends. The attendees and award recipients were the glitteratti of ocean preservation. I was impressed with the evening and so excited to be there. Just four years ago I began my exploration in ocean plastic pollution and last night I was rubbing shoulders with the movers and shakers of the planet’s preservation.

Captain Charles, thank you for the wonderful evening and for introducing me to so many wonderful people.

Here is a list of all the honorees of 2014 and links to learn more about their contributions.

He also commissioned a portrait and it was just delivered yesterday. You can also view a larger version in my portfolio for Eco Heros.